The figure below illustrates the separation of levels and the separation of concerns. Please also refer to the RobMoSys Glossary for descriptions of used terms. The levels indicate abstractions in a robotics system.

The levels can be seen as an analogy to “ISO/OSI model” for robotics that addresses additional concerns beyond communication. The analogy is interesting, because ISO/OSI partitions the communication aspect in different levels of abstraction that then help to discuss and locate contributions. The ISO/OSI separations in levels allows to develop efficient solutions for each level. Establishing such levels for robotics would clearly help to communicate between robotics experts–as ISO/OSI does in computer science. 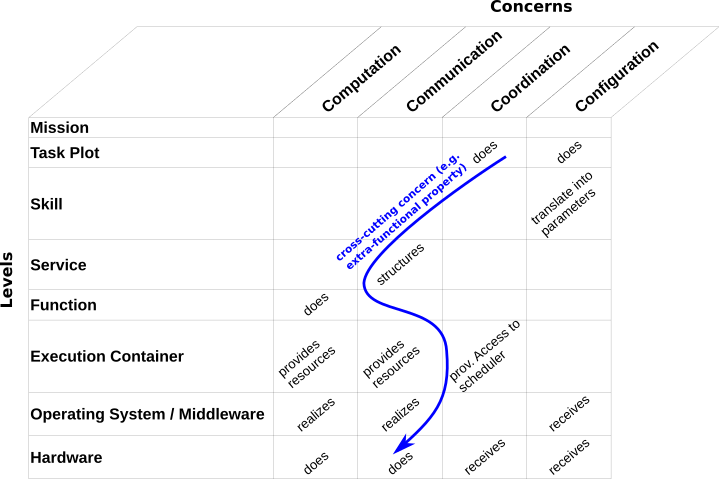 On the number and separation of levels 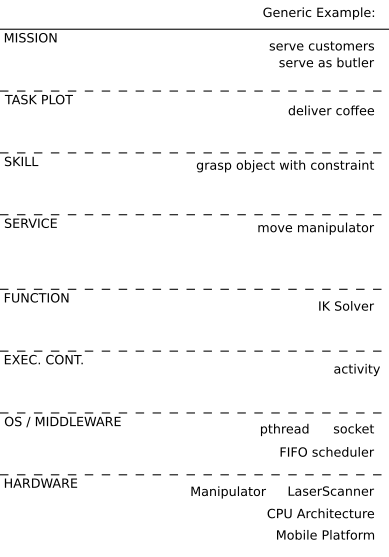 A the skill level is an abstraction level that decouples task-level and service-level. The purpose of abstraction is to enable replacement and composition of components (components providing the same skill) and decoupling (e.g. separation of roles: component developer and behavior developer).

A skill defines basic capabilities of a robot. The area of transition between high-level tasks and concrete configurations and parameterizations of components on the service-level.

A collection of skills is required for the robot to do a certain task. For example, a butler robot requires skills for navigation, object recognition, mobile manipulation, speaking, etc. A component often implements a certain skill, but skills might also be realized by multiple components.

A service is a system-level entity that serves as the only access point between components to exchange information at a proper level of abstraction.

Services follow a service contract and separate the internal and external view of a component. They describe the functional boundaries between components. Services consist of communication semantics, data structure and additional properties.

Components realize services and might depend on existence of a certain type of service(s) in a later system.

An Operating System is, for example, responsible for:

There are many distributed middleware systems available. However, they are designed to support as many different styles of programming and as many use-cases as possible. They focus on freedom of choice and, as result, there is an overwhelming number of ways on how to implement even a simple two-way communication using one of these general purpose middleware solutions. These various options might result in non-interoperable behaviors at the system architecture level.

For a component model as a common basis, it is therefore necessary to be independent of a certain middleware.

Solid pieces of bare metal that the robot is built of and uses to interact with the physical environment. It includes actors/sensors and processing unit.

This document contains material from: