You are here: RobMoSys Wiki » Community Corner » Introduction and Goal of COCORF in the context of RobMoSys
community:cocorf:start

This page is under consolidation and not yet part of the RobMoSys Body of Knowledge. Read more.

Introduction and Goal of COCORF in the context of RobMoSys

Hard real-time control software is often designed as monolithic components in order to circumvent the lack of temporal determinism of today's general purpose robot middlewares. COCORF will overcome this by combining the RobMoSys composition approach with the proven microblx real-time function block framework [1, 2]. This will enable building modular and predicable control systems by composing reusable blocks based on the function block model of computation. Microblx introspection facilities will be used to generate RobMoSys compliant digital function block data-sheets containing formalized constraints and QoS properties. Interoperability to existing robotics middlewares as well as separation of criticality domains will be realized by means of mixed-port function blocks. To validate the technology and to support early adopters, the approach will be illustrated by developing a generic control reference architecture and accompanying demonstration for the Assistive Mobile Manipulation Pilot. In this manner, COCORF lays the foundation for an extended RobMoSys Ecosystem of reusable, real-time function blocks.

By using the COCORF composition extensions, system builders are supported in the construction of reusable, hard real-time safe components.

microblx supports management of non-functional properties by providing relevant information. For example, the current execution timing properties (i.e. min/max) of schedules are made available on a tstats port (also see demo below).

(WIP). COCORF is developing tooling to allow automatic data-sheet generation from function blocks. This provides Component builders with accurate and up-to-date information on the blocks they are composing.

microblx uses a Lua based internal DSL to describe systems in so-called .usc (microblx system composition) files. Until COCORF, these descriptions contained a flat list of blocks, configurations and connections. This works fine for small systems, but falls short for larger systems where reusability and modularity are of more concern.

The implementation went largely as planned, however the following insight required deviating from the original plan. The original idea of extending ubx_launch(1) with a -a option to specify an activity model was abandoned in favor of the more generic approach of a “model mixin”. The latter permits specifying one or more additional models on the command line, of which each will be merged into the primary one. This not only addresses the requirement of supporting late binding to the platform (i.e. typically to to different activities), but provides an additional, orthogonal composition “operator”. Although not explored in depth, this promises to be useful for further use-cases (e.g. instrumentation), where functionality must be added while pollution of a reusable composition avoided.

As a self-contained example (to be shown at the ERF), a software only demo was prepared to illustrate i) how composition enables reuse and how ii) late binding to platform specific aspects is achieved using the model mixin feature. The code for this example can be found here [6]. 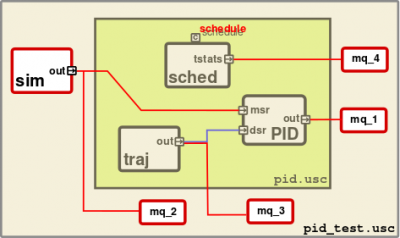 This composition can be now be reused in different use-cases and respective environment. This is achieved by including the basic composition in a parent composition, which overlays it to adapt it to its specific environment. For this demo, the pid.usc composition is to be reused in a simulation/testing environment (pid_test.usc). To that end a simulated sensor signal (sim) block is created and connected to the PID msr input. The schedule configuration is extended to include triggering of the new sim block. Additional connections are created to export the various internal signals from the blocks using real-time message queues (mq_X blocks) for debugging purposes. The connection from sched.tstats exports timing statistics such as worst case execution times out of the real-time context.

Alternatively, pid.usc could be reused on a real system by including it in a parent composition similar to pid_test.usc. Instead of creating and connecting a simulator block, such a composition would instead create a robot driver or sensor block and create the apppropriate connections.

The example can be launched using the following command (executed from the directory microblx/examples/usc/pid:

For running with real-time priorities, the ptrig_rt.usc file can be specified instead of ptrig_nrt.usc. Note that this requires to be run with elevated priviledges:

The exported data can be viewed using the ubx-mq(1) command:

Digital data sheets [10] summarize important information about function blocks. This information, rendered in a human readable form supports system builders to effectively decice whether a block is suitable for a specific scenario and ii) how it can be used. For instance, a digital data-sheet should contain general information about the block such as its Software license, but also specific technical information such as the block API.

For microblx, digital datasheets can be generated by leveraging the existing introspection functionalities. To that end, the ubx-modinfo tool was extended to generate data sheets in various formats including JSON, reStructuredText and plain text. For example, the following shows the plain text version of the PID controller data sheet:

Furthemore, the tool is already used to generate documentation in the reStructuredText format which in turn is used by the sphinx tool. The following command generates a reSt document for the PID block:

The result can be seen here.

The composition extensions have been realized and a first version has been announced on discourse [7]. Block digital data-sheet support has been completed and is already used to generate stub function block data-sheets[11]. The code changes for both features have been merged to the microblx development branch and are scheduled for release with the upcoming v0.8 release. At the time of writing, a third release candidate v0.8-rc3 has been released.

Workpackage 2 has the goal of implementing mixed port function blocks to connect to the ROS framework. Work has started in March 2020 as planned. First investigations of existing code has been carried out and a development of a prototype has started.