This page describes alternatives for realizing the RobMoSys Composition Structures. This list of alternatives shows examples and is not meant to be complete.

A meta-model is an abstract representation of a model. A meta-model in itself can be considered as a model that may or may not have an even more abstract representation (i.e. a meta-meta-model). There are no theoretical limits for going up the abstraction hierarchy. However, from a practical point of view, at a certain abstraction level it simply does not make much sense to go further up the hierarchy. Instead, there often is a meta-level that is abstract enough to define its own language. Example languages for such a level are: Eclipse Ecore and Essential MOF (EMOF). Nevertheless, it might make sense to go higher up the abstraction hierarchy above Ecore in order to define meta-levels that ease interfacing between the different realization technologies. Such a higher meta-level is for instance the Hypergraph notation. The relation between e.g. the Ecore based meta-models and the more abstract meta-levels is depicted in the figure below. 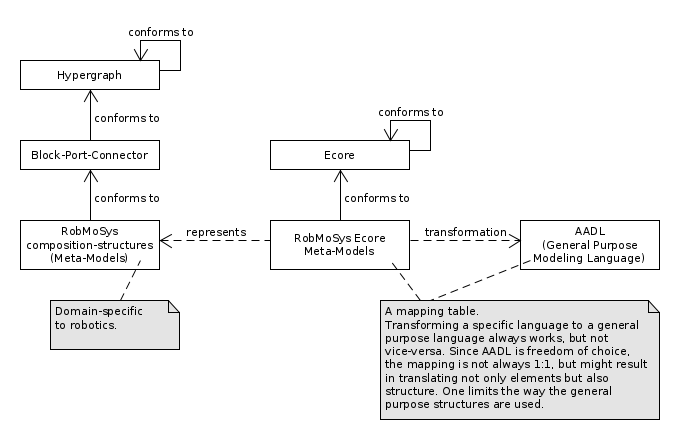 The left side of the figure shows a meta-level hierarchy starting with a Hypergraph on top, over Blocks-Ports-Connectors and down to RobMoSys composition structures. This hierarchy allows formal definition of meta-levels for the required structures independent of a particular realization technology. In the middle of the figure, a specific realization technology (in this case Ecore) is used to implement the RobMoSys meta-models. This is only an example and many other technologies can be used instead in a similar fashion. Moreover, other existing modeling languages (such as AADL) can be easily interlinked with the RobMoSys structures by defining model-to-model transformations. This is a powerful extension mechanism that allows usage of matured and powerful tools in robotics.

In the course of the project, RobMoSys is going to provide an Ecore implementation of the RobMoSys structures.

The figure above shows another example of using a different realization technology, in this case the UML/SysML and MOF as base structures. The RobMoSys structures on the left are unaffected by this different technology choice. It is worth mentioning that while the UML standard also specifies the graphical notation, the extension mechanism through profiling might be a bit more challenging when it comes to restricting the already defined modeling structures. These pros and cons need to be traded off when choosing a modeling technology.